Tinley Park-Park District was honored to receive a land donation from the family of Robert Allen McAllister.

Bobby, as his family called him, was born July 16, 1948 and grew up on the family farm in Tinley Park. He was the second of six children born to Ray and Dorothy McAllister. Bobby joined the Marines after graduating from Carl Sandburg High School in 1966.

t 18, 1968, Bobby was killed in action in Viet Nam when his group came under enemy attack. Although mortally wounded as he attempted to reach the battery aid station, he saw two hostile soldiers about to attack a bunker containing several of his fellow Marines. Despite his injuries, Bobby exerted his remaining strength to deliver accurate fire against the enemy soldiers and prevented them from carrying out the attack. His bravery and selflessness saved those Marines from death or serious injury. Bobby was awarded the Silver Star Medal posthumously for his actions that day. He will always remain in the hearts of his family and friends.

It is with deep gratitude for the sacrifice Bobby McAllister made for his nation and heartfelt thanks to his family that we gratefully accept this gift. 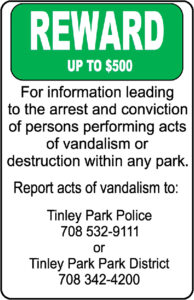 The District takes great pride in providing outdoor amenities for residents and visitors, and our staff works hard to maintain the premises. We ask and encourage residents that if they see something unusual happening in the parks system, to please notify the Tinley Park-Park District at 708-342-4200 or the Tinley Park Police Department by calling non-emergency dispatch at 708-532-9111.

Thank you for helping us keep the community’s parks safe, clean and enjoyable for everyone!